More than a decade ago, red packets are made from simple printed paper with a open lid in one end, resembling the envelope that used for letters. The lid have a layer of self-adhesive, which allows the red packet to be seal off once lid is folded.

Red packet with self-adhesive is very common as usually the monetary gift is placed inside the envelope. It is a practice to prevent monetary gift to slip out when handling, and prevent receiver of red packet to have a peak inside the red packet. It provides the sense of confidentiality like a seal envelope. 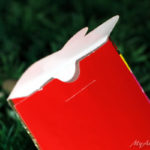 The red packet of these type only good for one use only. As opening the sealed lid will mostly destroy the integrity of the red packet. Those red packet that had been used will not be a prized collection for the collectors. Only new envelope with mint condition is prized. 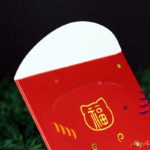 Fast forward to today, most red packets have no self-adhesive lids which is good for bulk collection. The lid is specially designed to have a latch or notch to hold the monetary gift inside. These red packet can be reused multiple time, as long as the appearance and condition of the red packets is still looks new and acceptable. This movement is also in keeping of reduction in paper used for red packet making and encourage reuse of red packets.

At least you no need to worry that someone had use saliva for the seal of the red packet like what most might did it to self-adhesive the letter envelope in the past.